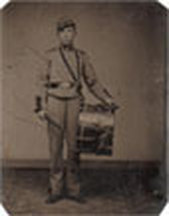 For the past three years I have participated in the School Day at the Confederate Reunion Grounds near Mexia. During this event I told a story about 'The Donkey Boy'. This story is set in 1836 Texas during the Texas Revolution, but about 25 years before the Civil War. I promised the folks running the event that I would have a Civil War story to tell this year. I have begun researching and an amazing story is emerging. The genre' is historical fiction, just like 'The Donkey Boy'. I have located a Civil War unit from Texas, Waul's Texas Legion, that formed up at Brenham in the spring of 1862 and moved on to Vicksburg in the late summer and fall of that year. Waul's Texas Legion participated in several scrapes during the defense of Vicksburg and then was part of Pemberton's Army besieged by Grant at Vicksburg. My character is 'Drumstick' Tommy Truelove, a Confederate drummer boy from Springfield, Texas. There were over 20,000 Southern drummer boys and this is my attempt to tell their story. I'm having lots of fun doing the research, but I am struggling with the writing. Struggling because I have decided that this story has to be more than a 20 minute tale told each spring at the reunion grounds, this has to be a book to be read by young readers who want to learn more about their history and heritage.

UPDATE: I spent about half the day in two libraries in Brenham, TX. At the Nancy Carol Memorial Library, I found several resource in the reserve section relating to the Civil War period and to Waul's Texas Legion. One 200 page book was a history of the legion complete with the names of 1350 of the 2000 men who served with the outfit. Very exciting. On the way back I visited New Year's Creek, Gay Hill, Independence, Yegua Creek, and Hearne. All place names mentioned in the Kyle diary. All in all, a very good day.

June 1 Update: I woke up at 4:00 this morning needing to add a chapter about river/stream crossing. Two hours and 1200 words later I was done with the first draft. This writing process is interesting. Most of the time I couldn't write a sentence if my life depended upon it, then inspiration hits and I can hardly get the words typed fast enough. Progress is progress after all.

June 2, 2016: Clearly, I have been away from this project for too long. Today I learned about some letters written by CPT Robert Voigt that have been translated from the original German and have become available at the Briscoe Library on the UT Austin campus. I look forward to adding this information to my background material. I have also gone to the Waul's Texas Legion, Sons of the Confederacy Facebook page and requested anyone having additional information to help me out. I haven't written any more yet, but I'm starting to get the itch.